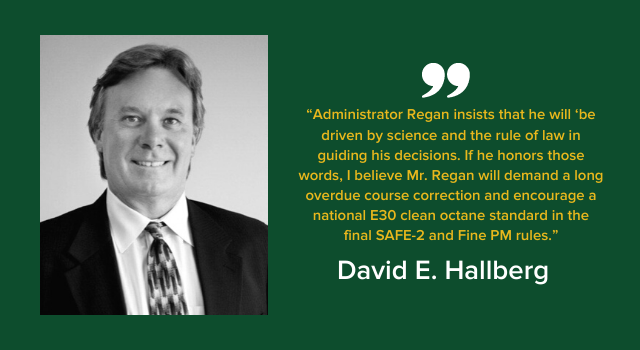 Sao Paulo, Brazil – (August 9, 2021) – Speaking to the 14th Annual Bioenergy Conference hosted by Brazilian government and industry stakeholders, the founder of the U.S. Renewable Fuels Association (RFA) charged U.S. EPA Office of Transportation and Air Quality (OTAQ) bureaucrats with a “shocking miscarriage of their environmental justice responsibilities” and for defying a mandatory law requiring the agency to reduce toxic, carcinogenic components in gasoline.

Classified as aromatics, refiners produce these benzene-based compounds, also known as BTEX, from crude oil to increase octane in gasoline despite existing laws requiring EPA to reduce them to the greatest extent achievable.

David E. Hallberg, who formed the RFA in January 1981 and served as its first CEO during the formative years of the U.S. fuel ethanol industry, noted that high octane, low carbon ethanol blends can cost effectively provide the required aromatics reductions. However, EPA has unlawfully blocked their development for decades. Hallberg noted this disturbing trend continues as the proposed fuel efficiency rule released last week failed to address gasoline even after EPA was presented with indisputable supporting information.

“Several powerful OTAQ officials—some of whom have been in their positions for thirty years—are restricting the use of the wrong gasoline component”, said Hallberg.

“These public servants have for too long now managed to hide behind bad science, defective models which they themselves have admitted fail to predict the most dangerous pollutants, and oil industry-manipulated test data. They have allowed the continued use of billions of gallons annually of the most carbon intensive, toxic, and expensive gasoline components in direct violation of Congressional directives first enacted in the 1990 Clean Air Act Amendments”.

In a 2011 report to Congress, EPA projected that by 2020, 90% of the $2 trillion in savings from the Clean Air Act’s health benefits would come from reductions in fine particulate matter (PM) and its associated toxics and only 10% from ozone control. However, Hallberg argues that OTAQ’s defective models have hidden the truth from the public, press, and Congress that the predominant source of fine and ultrafine PM is gasoline BTEX. Even more troubling, he says, these dangerous emissions will get worse as advanced gasoline direct injection (GDI) engines dominate the U.S. light-duty fleet unless aromatics are substantially reduced.

Numerous other organizations expressed their dismay that EPA has failed to act, particularly when the fuel economy rule presented such an opportunity. The Clean Fuels Development Coalition’s Executive Director Douglas Durante said “The Department of Energy and their national labs, along with auto industry scientists confirm that high octane ethanol blends such as E30 can reduce UFP-bound toxics, black carbon and other dangerous emissions by 45 – 85% in optimized high-compression engines,” Durante noted that CFDC has been working through the High Octane Low Carbon Alliance, led by former Senate Majority Leader Tom Daschle to convey this message.

Durante said although the proposed rule did not solicit comments on the role of high- octane fuels in meeting efficiency and emission requirements, they intend to provide extensive comments and call on EPA to explain how they can ignore the health threat of gasoline.

Even the Trump Administration, not exactly known for a focus on health and the environment, requested comments on these issues, said Durante.

Doug Sombke of the National Farmers Union said an increase in octane not only provides significant health benefits if non-toxic and low carbon ethanol is used but it also increases demand for domestic agriculture products.

“EPA continues to view these issues with tunnel vision,” said Sombke. “Creating jobs in the ag sector, reducing oil imports, reducing gasoline prices, and stimulating other sectors of the economy are all near- to mid-term benefits that should be part of a new fuel economy standard, but the EPA is unlawfully focusing only on electric vehicles”.

Hallberg predicted that new facts recently brought to the attention of President Biden’s new EPA Administrator Michael S. Regan will persuade him to correct OTAQ’s misguided policies. “There is indisputable evidence that urban PM-borne toxics are the predominant health threat in urban areas and inflict disproportionate harm on infants, children, and residents of economically- disadvantaged communities”, he said.

“Administrator Regan insists that he will ‘be driven by science and the rule of law in guiding his decisions. If he honors those words, I believe Mr. Regan will demand a long overdue course correction and encourage a national E30 clean octane standard in the final SAFE-2 and Fine PM rules.”